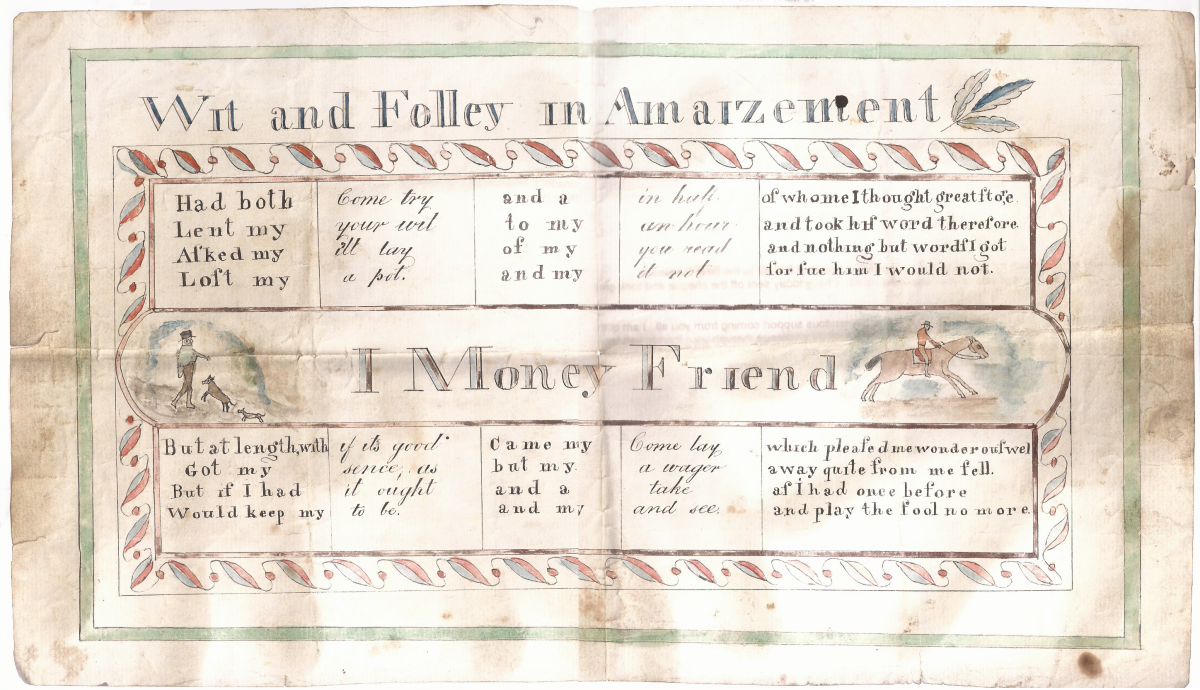 This is a genius piece of work, I have shared it on the ‘Roots Chat Forum‘ and had some great suggestions as to what it is, huge thank you to Andrew Tarr and Millipede for their input. Essentially you make it to be whatever you want it to be! The words in normal text are the actual lines of the poem, the bits in italics is where you add words, probably the ones in the larger font. It is probably a ‘Skill and Judgement’ exercise. It is all rather confusing, but undoubtedly brilliant and as one forum user said ‘No doubt it can be made as saucy as one wants’!

This is my first attempt at it (using just the large font words)!

Wit and Folley in Amaizement

But at length, with wit came my friend which pleaded me wonderous well
Got my money but my wit away quite from me fell.
But if I had money and a friend  as I had once before
Would keep my friend and my money and play the foul no more

Holding the paper up to the light I have just spotted a really interesting watermark on the paper. 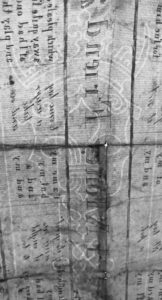 In the chest is the blessing of Mary Elisabeth who was born on May 18th 1852. The blessing took place on May 28th 1882 and was conducted by Elder A.M. Harmon who was the Pastoral Charge of the Newcastle-Upon-Tyne, Hull and Carlisle Conferences for the Church of the Latter Day Saints. He originally came from the Great Salt Valley (Information on Elder A.E. Harmon was found here:  https://archive.org/stream/halfyearlyreport00newc/halfyearlyreport00newc_djvu.txt).

A transcription of the blessing is as follows (spellings as originally written):

Mary Elisabeth daughter of Robert and Hannah Telford, born May 18th 1852 in South Shields County of Durham and was blessed May 26th 1882 by Elder A.M. Harmon as follows.

In the name of Jesus of Nazareth I take you up in my arms, according to the pattern shown by our Lord and Saviour and by virtue of the Holy Priesthood bless you because thy parents desire it. I pray God my Heavenly Father through Jesus his Son to bless the(e) with  health and strength and with a long life may she grow up in the fear and admonition of the Lord, and become a pattern of piety to those with whom able may associate.

Grant Heavenly Father to perserve her from all the snares of the wicked one from all the plagues of the last days, from pain disease and death and may she grow up in the Faith of Christ . be gathered to the Mountains of Ephraim and there be an ornament of Society, and be numbered with the Daughters of Zion. And as much as she is trained up in a right manner and in faithfulness by her  parents she shall receive all those blessings upon thy head to be realised through the faith of thyself and parents. The destroying angel shall pass by thee and not have power to lay his Iron grasp until thy work is done upon the earth and thou shalt be perserved by the power of the Great God and your name is

Currently I do not know why this is in the chest, or if there is any relation to the Charlton/Caswell families. It is a bit of a mystery! 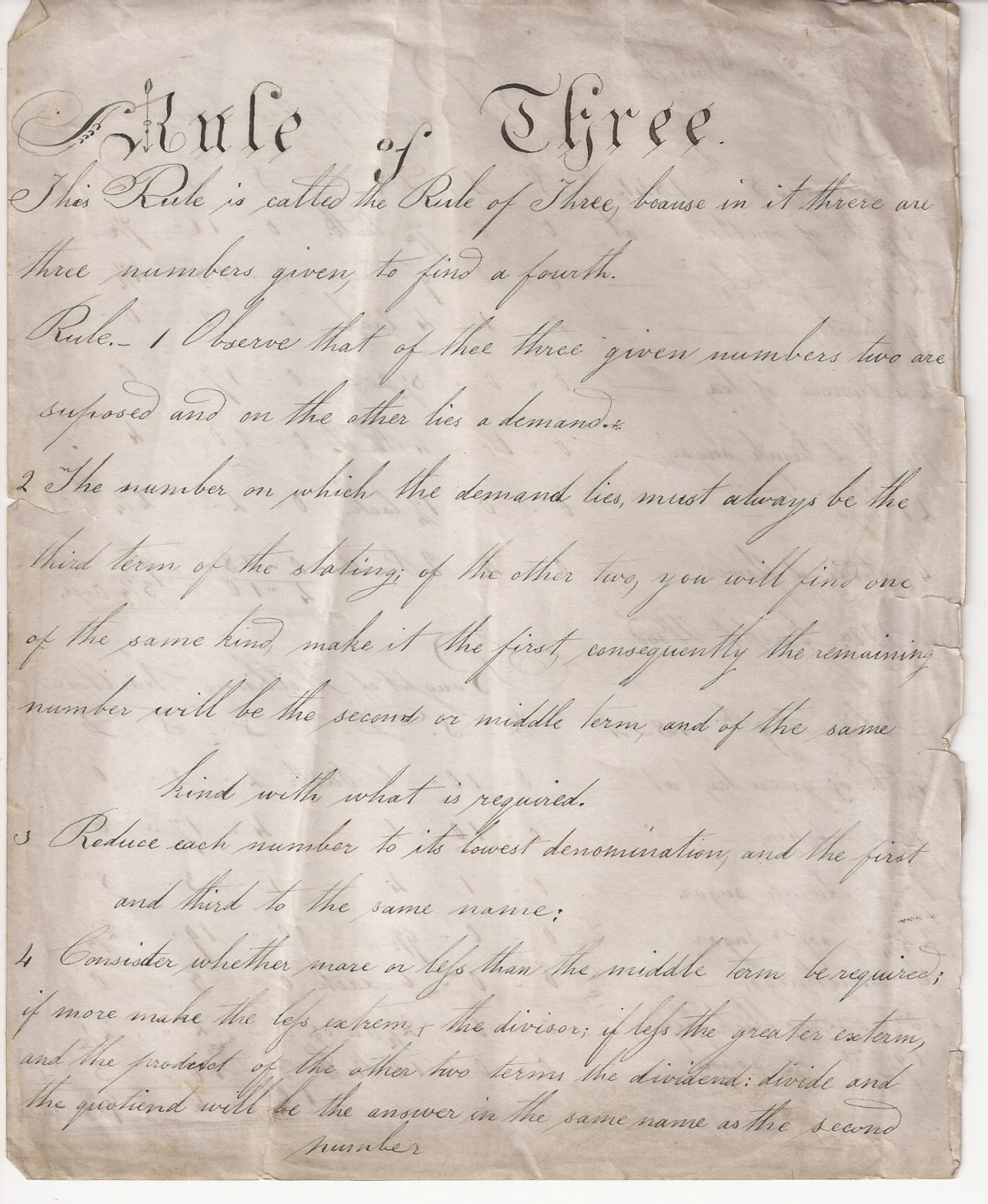 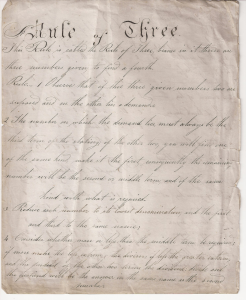 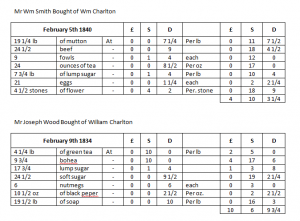 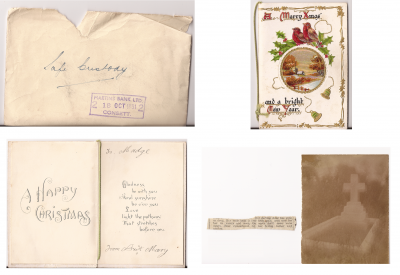 This is quite an unusual Christmas card. It is addresses to Madge – who ‘could’ be Margaret Charlton nee Hedley (Esther’s mother). From an Aunt Mary – Not entirely sure.

However, what makes it somewhat unique is that it is an envelope marked:

Although I do suspect that the two were not paired together initially.

Inside the Christmas card is a lovely verse:

Gladness be with you
And sunshine o’er you
Love light the pathway
That stretches before you.

Slipped into the card is a photograph of a grave and a tiny slip of newspaper which reads:

Our darling child has gone to sleep,
Her little head is free from pain,
And now for her we mourn and weep
On earth she’ll never wake again.

Ever remembered by her loving father and mother.

Unfortunately, I don’t really know anything about Aunt Mary or her lost daughter – but I shall endeavor to try to find out.